Home > Educational Canning Information > Lesson Learned – How many lids in the pot?

Lesson Learned – How many lids in the pot? 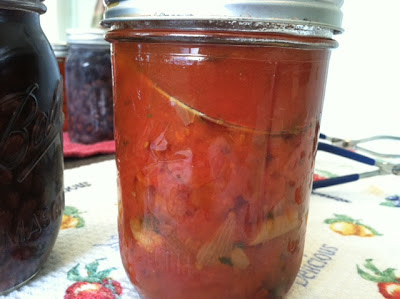 Today I had a pressure canning class and had something happen that has never occurred before and probably will never come up again.

I think that I figured it out! One of the new people to canning at the class was taking the hot lids out of the pot to place on the jar. Using the magic wand or lid lifter, she picked up wide mouth lid and stuck to the bottom by using the magnet on the end of the lifter accidently grabbed a smaller regular lid as well. Not noticing that the other lid was underneath she placed it on the jar and when she pulled the magnet away from the wide mouth lid and the smaller lid dropped into the jar. Once the ring was added the second lid wasn’t visible.

As we finished prepping the last jars for the canner I counted the lids still in the hot water and we were short one regular lid. I thought I miss counted and added another regular mouth lid to heat in the hot water.

After the pressure canner was opened the lid was displaced after being in the canner for the duration of processing time and it was visible. Tina noticed it and thought it was possibly a crack in the jar but as soon as I saw it I knew what it was.

I just opened the jar a few minutes ago and saw the smaller lid in the jar. I tossed the jar contents since it had processed fine, wide mouth lid sealed perfectly, but I wasn’t sure about the rubber and metal cooking in the jar and didn’t really want to serve that to my family, but it was a great lesson learned! Keep track of your lids!