Strawberry Jam – What’s with all the Foam? 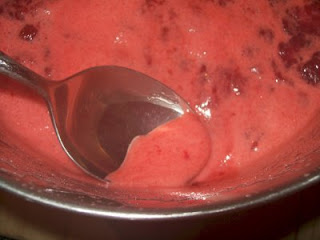 One of the followers on my Facebook page asked a great question: Why is there foam when I make Strawberry jam? I wanted to do some research since I am doing multiple batches of jam this week with both strawberries but will incorporate other fruits such as peaches, apricots, blackberries, and even marmalade with citrus.  My research took me to the web but found the writers gave the reader the process of getting rid of the foam; “skim the foam” or “add a teaspoon of butter”, neither gave me the answer to the question. Besides adding the butter doesn’t seem like a good idea of putting fat into my perfect recipe that is supposed to last at least a year.

I came up with one scientific and another experimental reason that I will try to proof.  Scientific: Strawberries have air in them and the foam is a result of the boiling process releasing the air and forming bubbles or foam.

After doing a batch of strawberry peach preserve the foam appeared just after the recipe got to a boil. No sugar or pectin had been added yet.  So if it’s about the air in the fruit this could be the logical reason.  But in addition to this theory others speculate that it’s the type of sugar that you use. Some believe that an organic sugar rather than processed sugar will create the foam. 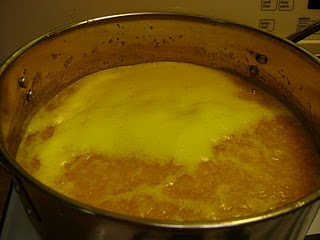 So there is possibly the experimental reason: It could be the combination of sugar or type of sugar you use with the fruit, possibly more of a chemical reaction. For my first batch of jam today, strawberry peach, I noticed the foam before the sugar was even added. I then added one cup of conventional sugar, but the foam did not increase or decrease even when brought back to a boil.

My second batch of jam was a peach pie jam and the foam was present after the first boil and the addition of sugar. So I don’t think that the sugar creates the foam effect.

My conclusion is that for now the air inside the fruit is the being released and creates foam when the fruit gets to a boil. I will be mindful to watch and see if this happens with all kinds of fruits. 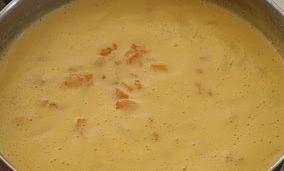 We are all aware of the foam affecting the appearance of the final jar and that seems to be why so many people work to skim as much off as possible. The foam also contains air which when put it into your jars and processed in a water bath, as the expansion of the fruit happens, the f0am will decrease your headspace. You are adding air in your headspace and in my food safety work it’s not a problem in the short term but this extra air may cause your jams to mold after storing them more than six months.

I hope this experiment explains some of the mystery of the foam.